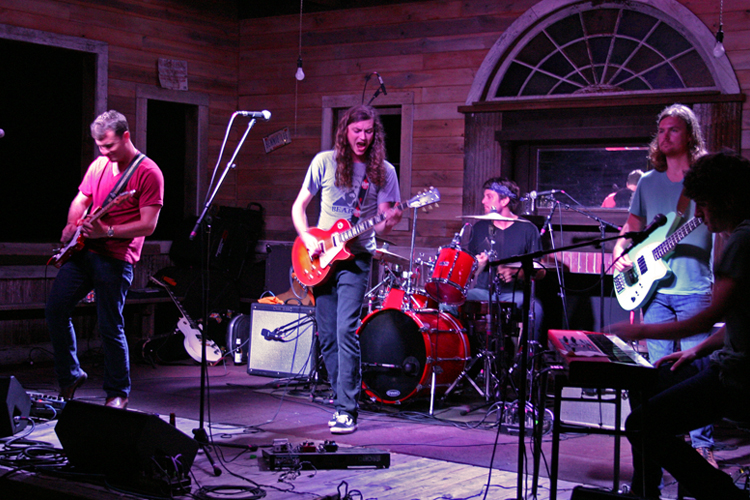 Friday night of RXR Fest features the outstanding talents of a couple of local bands. This event just would not be complete without The Bank Walkers! From Alexander City, these guys have been a part of RXR since the beginning! They are super entertaining and their playlist is all over the place, from the Black Crows and Allman Brothers to The Band and more! Catch the Bank Walkers when they take the Green Stage at 6:30!

We booked The Big Stitch for RXR Fest in 2020 and we all know what happened to 2020! Well, this year they are set to take the Green Stage at about 8pm. Fronted by Jonathan Bloom don’t be surprised if you see some musicians from a couple of well-known bands playing with him. The Big Stitch promises to be Big Fun!

For way more than a decade, Adam Hood has left his mark onstage and in the writing room, carving out a southern sound that mixes soul, country, and American roots music into the same package. It’s a sound that began to take shape in Opelika. Raised by working-class parents, he started playing hometown shows as a 16 year-old, landing a weekly residency at a local restaurant. He’d perform there every Friday and Saturday night, filling his set-list with songs by John Hiatt, Steve Warner, Hank Williams Jr, and Vince Gill. As the years progressed, the gigs continued — not only in Alabama, but across the entire country, where Hood still plays around 100 shows annually.

These days, though, he’s no longer putting his own stamp on the songs of chart-topping country stars. Instead, many of those acts are playing his music. Little Big Town, Miranda Lambert, Anderson East, Frankie Ballard, Josh Abbott Band, Lee Ann Womack, and Brent Cobb are among the dozens of artists who’ve recorded Hood’s songs. Adam says, “One of the t-shirts I sell at every show simply says ‘Southern songs’ and that’s a good summary of what I do. It’s what I’ve always done.”

Adam Hood will be on the Green Stage at 6:30 Saturday night

On Saturday night of RXR Fest, we invited a group that we have been following for a couple of years. Since 2009, Carolina Story has built its reputation the old-fashioned way, performing countless shows from coast to coast during a whirlwind six-year run that saw them gracing stages from the Grand Ole Opry to AmericanaFest. After taking a temporary break from the road to welcome two children into the world, the duo returned in a big way in 2017, signing with the record label Black River Americana to release their studio debut, Lay Your Head Down. The album was a critical hit that helped land the band dates with the likes of Hayes Carll, Bob Schneider, and Delta Rae, and prompted Rolling Stone to declare them an “Artist You Need To Know.”

Blending folk intimacy, country grit, and alt-rock muscle, Carolina Story’s resilient new album, Dandelion is an ode to survival in the face of struggle, a full-throated tribute to the power of hope and the unbreakable bonds of family. “There’s just something about the dandelion that spoke to us,” says Ben Roberts, who shares vocal and songwriting duties with his wife, Emily. “It’s this humble little plant that’s so tough it can grow through cracks in concrete. It’s an underdog, just like us.”

Carolina Story will take the stage at 8pm on Saturday night.