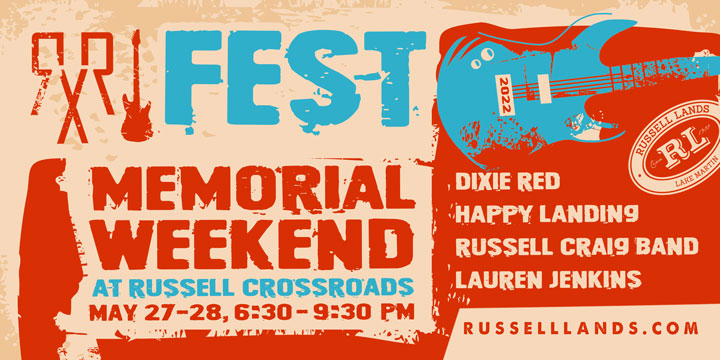 We are so excited to announce the line-up for RXR Fest 2022. Over two days, this event features highly popular local and regional bands that are on the rise.

We will kick off RXR Fest on Friday night at 6:30 with Dixie Red. These lively southern rockers, from Lee County, will quickly have you out of your seats!

Following Dixie Red, from Oxford Mississippi is Happy Landing. This high energy “skate folk” band will have you humming their songs long after their performance ends.

On Saturday night we bring to the stage, Russell Craig. Russell had played numerous Fridays On The Green over the years, but we have never had the full band on the Green Stage. We are excited that The Russell Craig Band will kick off the Saturday night edition of RXR Fest at 6:30.

Then closing the weekend is Lauren Jenkins. “Lauren is unapologetically raw at times, uncompromising and unflinching in the way she looks at the world and herself. If you are looking for someone with meaning, someone with a knack for melody and someone with an honest, authentic view of life, love and relationships, then Lauren Jenkins always has been, and even more now, is the perfect artist for you.” – Lyric Magazine

Bring the fam and friends, your comfy stuff and claim your spot both nights for RXR Fest 2022!

For more on these folks see below!

Fronted by Slapout native and Kowaliga Idol 10 winner Ashely Miller, Dixie Red is a very high energy southern rock band playing a good bit of their own original music, as well as covers that they’ve master the Dixie Red way! Dixie Red will kick off RXR Fest as they take the Green Stage Friday, May 27 at 6:30pm.

No stranger as a solo artist to the Green Stage, Russell Craig has been with us for several years, but for RXR Fest we invited him to bring the whole band down to kick off Saturday night!

Russell was born in Dothan where as a child, Russell was diagnosed with Retinitis Pigmentosa (RP). He began his musical training at 10, first learning to read music with the help of magnification and later by ear. When Russell is not on stage, he is working with children and adults with disabilities through his position at the Alabama Institute for Deaf and Blind (AIDB).

“What I love most about my current situation is that, with the relationships I’ve built at Auburn and at AIDB, I now get to share my music beyond just the general public,” Russell said. “I am now able to perform at places like Camp ASCCA and really connect with whole crowds of people with disabilities. I’m so thankful that no matter where I am and no matter what I’m doing, I am in a position to help others and make a difference in my community.”

Singer-songwriter Lauren Jenkins has been a touring artist since she was 15 years old. The Texas born, Carolina-raised artist chose a life that would fit perfectly in the songs she writes across countless smoky bars, fake IDs, and endless miles on the road, music has been her one constant companion. Lauren’s unfiltered lyrics and unmistakably authentic vocals blend traditional country roots with Americana influences; she’s equally at home with cheerful radio-friendly melodies one moment, and expressions of raw emotion the next.

Named an Artist to Watch by the New York Times, Billboard, Rolling Stone, Pandora, and many more, she was also chosen as a member of the “Class of 2019” by influential radio DJ Bobby Bones, and made her TODAY Show debut as Elvis Duran’s Artist of the Month. An accomplished actress and filmmaker, Lauren also wrote, produced, and starred in an original short film titled ‘Running Out of Road’ that accompanied the release of her critically-acclaimed debut album, NO SAINT, on Big Machine Records. In May of 2020, she released “Ain’t That Hard,” her first song as a fully independent artist.

Lauren will close RXR Fest as she takes the Green Stage at 8pm.